Possibly the most useful key to reading Lavie Tidhar’s Central Station can be found after the last page of the story itself. It’s the list of previous publications—used to construct this novel. About a dozen of its chapters are, in the author’s words, substantially revised short stories that have appeared in various places over the last few years; merely a handful of the chapters were written from scratch.

While this is not good or bad in of itself, here it shows. The chapters of Central Station work very well precisely as separate pieces. Tidhar has constructed a dazzling post-singularity world, pieced together of a myriad technological miracles, annealed in the megatext of SF. The world underlying the prose is rich and variegated, there is a lot to it in terms of all those building blocks of the genre: imaginary science and new technology, future history and future languages, the sublime and the grotesque, the various archetypes of SF (per Istvan Csicsery-Ronay’s classification of SF’s seven beauties). Somewhere in Earth’s future, humanity has mostly migrated to other planets, stars, asteroids, virtual realities. People remain on the home planet, however. Beneath Central Station – a towering space port between Tel Aviv and Jaffa – some few hundred thousand of denizens spend their days: mostly the descendants of immigrant workers, living in a post-national world ever teetering on the verge:

“Arab or Jew, they needed their immigrants, their foreign workers, their Thai and Filipino and Chinese, Somali and Nigerian. And they needed their buffer, that in-between-zone that was Central Station, old South Tel Aviv, a poor place, a vibrant place—most of all, a liminal place.

A setting that is naturally viewed from a fractured, multiply-POV-ed perspective, a slippery eel to catch in the nets of traditional narrative. Its characters are humans whose organisms are fully intertwined with biological nodal interfaces, connecting them to the unceasing Conversation of billions of humans and many billions more of smart appliances (like an elevator which dreams of moving in more than two directions). Some of them cyborged to different degrees, some invaded by maleficent viruses and turned into data-vampires; other turned into Others – aliens of the Digitality, evolved here on Earth servers and let free to eventually manipulate the fate of humanity to inscrutable ends. There’s also robots (followers of the Way and the Church of the Robot) and ex-human robotniks (working menial jobs, talking in Battle Yiddish and getting high on crucifixation). There’s gods and godmakers, gene-tinkered children that can manipulate mind and matter as easily as they dream, there’s vast virtual realities that some believe our own world is contained in. There is a lot in Central Station, that much should have become clear. 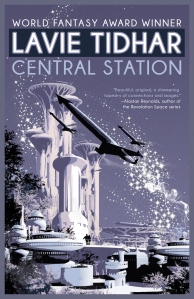 Some of the chapters are indeed wonderful expositions of those vast and yet teeming realities of otherness. The best ones are those that telegraph that radical strangeness and leave the most interesting pieces as lacunae for the readers to fill. A world such as this one should provide the perfect grounds for the construction of a mosaic novel, where the separate pieces touch briefly here and there and paint the canvas in an erratic and hyperreal fashion. Tidhar, however, has chosen another way – that of the family saga. At least, he has tried to build something like that, because in reality the many chapters and POVs hardly coalesce in a clearly structured narrative. Thematically, the book sort of explicitly points to what it is interested in: family, childhood and adulthood, otherness and transition, memory.

Structurally, though, it fails to support its ambitious goals. The characters are too many and their appearances are unevenly strewn throughout the text, its symbols are not coherently organized and profiled, the dramatization is namely that of the short story, rather than a novelistic one. On the lower level of information structuring, the infodump rules supreme. Tidhar writes his infodumps rich and poetic, but that is insufficient to elevate a narrative from good to great. Wordiness, especially in the case of SF, sanitizes the sublime. Probably the best example for that in Central Station is the author’s nagging insistence to translate every single utterance in asteroid pidgin, the made-up language of space:

These clarifications are abundant and a disservice to the text. Too much of it reads as if snippets from Google Translate and Wikipedia are inserted in apposition (“Robotniks, the last soldiers of the lost wars of the Jews – mechanized and sent to fight and then, later, when the wars ended, abandoned as they were, left to fend for themselves on the streets, begging for the parts that kept them alive”). This is a pity because Tidhar clearly can write economically and elliptically:

“Ibrahim was old, he had been around when there were still oranges.”

“Later, he, too, worked on the building, two generations of Chongs it took to bring it to completion. Only to see his own son go up in the great elevators, a boy determined to escape, to follow a dream of the stars.”

Either a true mosaic novel or a true family saga could have given this overarching story the shape of greatness. As it is, Central Station now stands as a powerful exemplar of SF worldbuilding, adequately written and occasionally poignant and pregnant with poetry, but eventually falling short of what it reaches for. Double the pity, as it is so imaginatively rich, erudite and well-connected in the graph of SF intertextuality. Fans of Dick, Silverberg, Rajaniemi will probably like it, though I don’t know how many will love it. In one of the novel’s most sympathetic characters’ thoughts:

“It is perhaps the prerogative of every man or woman to imagine, and thus force a shape, a meaning, onto that wild and meandering narrative of their lives, by choosing  a genre.”

Genre, in the formal sense of the word, does not align smoothly to the novel’s thematic preoccupations. But rarely do we see aspirations so lofty as they are in this novel. For that at least, Lavie Tidhar’s novel is worth checking out.

PS: Many thanks to the publisher for the ARC.

My name is Alexander, aka Random. I am 27 and I love to read and write, especially speculative fiction. I am part of the team behind ShadowDance, a Bulgarian online fan-zine for SF and fantasy. I am also a grad student interested in language, all minds natural and artificial and, of course, the Future. I’d love to someday speak to the dolphins and see the fnords.